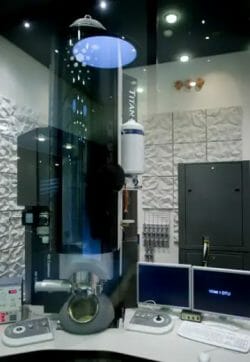 We all know that Denmark country is famous for its unique technological innovations and breakthrough scientific researches. The country is home to various international companies in the field of technology as well as world class educational institutions.

In the very near future, this Nordic country will play host to a new European research facility. The European Spallation Source (ESS) worth 11 billion kroner is now being planned in the Oresund region. Targeted to be completed by 2020, the facility will become the strongest neutron source in the world and it could also be the biggest microscope. As of today, the exact location of this neutron source has not been formally decided although talks are circulating that it could be in the Oresund region.

The European Spallation Source is a linear particle accelerator. It is here where the protons collide with mercury eventually producing very strong neutron impulses. These high intensity neutron sources coupled with advanced instrumentation are useful in different fields of research such as in telecommunications, biotech and energy extraction.

Denmark and Sweden have joined forces to host the ESS Scandinavia. In fact, other countries such as Germany, France, Poland, Estonia, Norway and Latvia have also offered their support to the facility. Officials from the Ministry of Science and Technology are optimistic Denmark is in a favorable position to host the research facility.

Spain and Hungary has also offered to play host to the ESS facility. A formal decision is now being awaited to finalize the location of the neutron source and start preparations. Initially, three areas are being considered such as Lund Sweden, Bilbao in Spain and Debrecen in Hungary.

If Denmark’s Oresund region is included in the project, it will contribute 12.5 percent of the construction cost which is approximately 1.4 billion kroner. Earlier in May, Sweden signed a memorandum of agreement to host the ESS research facility.