Situated on the Jutland Peninsula, Aarhus is embraced by the waters of the North Sea, and is well-known as an industrial area and also the principal port of Denmark. In terms of land area, Arhus is the second largest city in the country, next to the capital of Copenhagen. The metropolitan area of Arhus has about 1 million residents, making it the second most populated in Denmark.

The transportation system of Arhus makes it convenient to get around the place, as there is an airport, as well as a railway system with 20 depots that span the city. Residents of Arhus popularly travel on commuter bikes, called City Bikes. 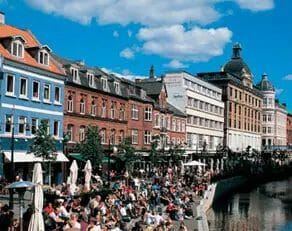 The second largest university in Denmark is Aarhus University established in the late 1920’s, with more than 35,000 students enrolled to date, both from Denmark and from outside the country. Famous alumni and alumnae from Arhus University include members of the Danish royal family, as well as notable scientists and politicians. Because of the large student population, the average age of Arhus' inhabitants is among the lowest in Europe.

There are many ideal venues in Arhus to cater to the whims of history and art lovers. Famous museums you can visit include: the ARoS Aarhus Kunstmuseum, one of the biggest art museums in Northern Europe, and is also home to exhibits by personalities like Hans Christian Andersen, Andy Warhol, and Roy Lichtenstein. Another museum worth visiting in Arhus is an open air one, also called the Old Town, or known for its Danish name Den Gamle By. This village features buildings and gardens which were built as early as the 1500’s, plus museum staff dressed in the traditional Danish attire to give the historic feel of the venue. More than 3 million people visit this exhibition every year.

For family fun and enjoyment, Arhus also has a lot of great sites to offer, especially for the young ones. Arhus encourages kids to get closer to nature, through many nature parks and zoos such as the Deer Park, the Natural History Museum, and the Botanical Gardens. Have a feel of the rainforest at the Randers Regnskov Zoo, where marine life, reptiles, and more can be viewed. A popular theme park that will surely bring a smile is Tivoli Frieheden, with rides like bumper cars, Ferris wheel, and other fun games. If amusement is still on the agenda, you can also come visit the many theaters in Arhus, to have your fill of film and music.

If you have a penchant for shopping and great foods, Arhus has locations for you. Vestergade and Møllestien and Stroget are excellent for those who like to stroll and shop to their hearts’ content. Hundreds of brands and designers can be found here. For those Denmark tourists who want to find good eats, then shopping at the country’s larder is ideal. This market is called Frederiksbjerg, which also includes restaurants and shops. When you want to take a coffee break and relax along cobblestone streets, then head on over to the Latin Quarter, where cafes, restaurants, and shops are also found.