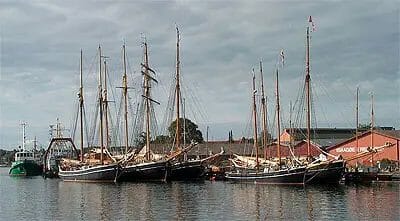 Svendborg is a city in central Denmark on the island of Fyn. Svendborg is the second-largest city on Fyn and has a population of 27,318.

In 2000 Svendborg was declared “Town of the year” in Denmark, and in 2003 celebrated its 750th anniversary as a market town.

Around 1000 years ago a small wharf was founded at where Svendborg now is and from this Svendborg grew over the
next centuries to reach the size it is today. The area between the
bridge and St. Nikolai Church held the first of the city’s houses.

Over the years these have been torn down and replaced by more
contemporary houses, but the traditional maritime merchant influence can still be felt.

As you explore you will quickly discover the quirky little shops, the many restaurants and taverns and the photogenic details and attractions of the area that is known today as the Svendborg Latin Quarter.

The oldest church in Svendborg has naturally been dedicated to St. Nikolai, the patron saint of
sailors. The church was erected in the beginning of the 13th century on the foundations of an even older stone church. The oldest part of the church is the basilica itself made from red medieval bricks. Throughout the following centuries the church was expanded on several occasions, most recently with the addition of the great tower in the late 1400’s Gåsetorvet (Goose Square).

This beautiful and well-preserved well dates back to the 15th century and was a public well for about 200 years. The medieval fence and wooden hoist are reconstructions from the 1990’s.

On a beautiful summer evening this is one of the most romantic spots in Svendborg. Enjoy the view of Skansen, the scent of tar and the pulsating life onboard the old wooden ships.

This peculiar old warehouse with carved dragons under the eaves houses the many activities taking place throughout the summer at the Maritime Centre. From here trips on the Centre’s wooden ships can be arranged and there is regular music and markets focusing on the good life in Svendborg.