The Tsar's Dwarf is a tragicomical historical novel about a Danish dwarf who is given as a gift to Peter the Great and ends up as a court jester at his court.

Written by Peter Fogtdal, the winner of the Denmark.net Jazz Weekend competition, The Tsar's Dwarf has been published in USA, Canada, France, Portugal, and Denmark. You can buy the English version here: The Tsar's Dwarf.

Peter has granted Denmark.net the friendly permission to print the first chapter. 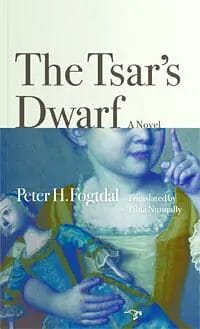 My name is Sørine Bentsdatter. I was born in 1684, in the village of Brønshøj. My father was a pastor, my mother died in childbirth.

When I turned six my body decided not to grow anymore.

I don’t care for the term “dwarf.”

As a rule, I don’t care for dwarves at all.

The fine gentlemen have brought me up here to Copenhagen Castle. They’ve set me on a carpet that feels as if I’m treading on seaweed. Now they’re looking at me in that jovial manner they favor—their heads tilted, their lips twitching—but I stare right back at them. I always stare back, because they’re uglier than I am. The only difference is that they don’t know it.

“Do it again,” says the finest of those gentlemen.

His name is Callenberg. He’s a smug cavalier with red cheeks. His legs are bound with silk. I put my hands on my hips and stare at his multiple chins, which are quivering with mirth.

Callenberg spreads his legs and smiles. I move across the soft floor, duck my head, and walk between his legs. I do it four or five times, back and forth, like some sort of obsequious cur. And now they’re all applauding; now they’re cackling contentedly in their perfumed chicken yard. Of course I could have bumped my head into Callenberg’s nobler parts, but that would have been foolish. And you can say any number of things about a wench like me, but I’m no fool. “Splendid.” Callenberg draws his legs together with a satisfied grunt.

The courtiers once again stare at me with a condescending expression—the same way that everyone looks at me, with a despicable mixture of contempt and joviality. But they could just as well have been staring out the window. They could just as well be gazing up and down the length of the Blue Tower, because they don’t see me, those people. How could they see me when they’re as blind as bats?

All at once I catch sight of my figure in the mirror. I’m small and withered, with deep furrows on my brow. My eyes are tiny and green, my lips thin and sardonic. My nose and my ears are a bit too big, my hair is long and graying. The veins dance up and down my bowed legs, but there is nothing ridiculous about me. That’s something they’re all going to learn.

Callenberg sits down on a scissors chair and snaps his fingers. A moment later a glass of clove wine is brought to him along with a plate of Flemish chocolates.

His hands are fat and pink, his nails look like shiny seashells. That’s how a human being is. Loathsome and vain, with habits that increase in cruelty the more the person eats.

“Ask the dwarf what sort of tricks it can do.”

The First Secretary turns to me. When he speaks, he does so slowly, as if he were talking to an idiot. I choose to ignore him. I’m familiar with the fine gentlemen. I have more experience with them than I would care to admit. I know how they think and how they behave. They can’t fool me with their vulgarities.

“Can the dwarf perform tricks or read fortunes in salt?” Callenberg asks. “I can both read and write,” I tell him. Callenberg tilts his head back and laughs. He would howl with laughter no matter what I said, because dwarves are so droll, dwarves are entertaining in the same way that parrots are entertaining. We are creatures who serve only one purpose: we exist so that human beings can feel superior.

Callenberg rubs his hand over his chins.

He is the Lord Steward at the castle. Not just the Lord Chamberlain but the Lord Steward. That’s the sort of thing that the nobility care about. Their whole raison d’être lies in titles. The higher the title, the greater the reason they have for existing.

“I can both read and write,” I repeat with annoyance. “I also know German, Latin, and a little French.” “And where has the dwarf learned these things?” I let my eyes survey the chamber. Exquisite portraits of Frederik IV hang on the walls. The drapes, which are a golden peach color, flutter in the breeze. There are chromium-plated mirrors with sullen looking angels. The strong scent of Hungarian cologne permeates the wallpaper. All very elegant, for those who have a taste for elegance.

“I suppose the dwarf is also knowledgeable in Russian?”

The Lord Steward looks at me with a condescending expression. Then he snaps his fingers and a chamberlain opens the lavishly embellished doors.

“Tell the dwarf to come back tomorrow.”

The First Secretary nods. He has a weak chin and a timid face—the sort of face that confirms the amount of time he has spent in submission to his master’s fury.

Callenberg disappears down a long passageway lined with Venetian mirrors.

The last I see of him are his hands behind his back and his thin legs beneath his stout body. After that he is swallowed up by the castle—and by the specters of all the kings who refuse to let go of the past.

A few minutes later I’m escorted down several narrow staircases intended for the servants. The stairwell feels damp and clammy, and I very nearly slip on the high steps. Two dead bats are lying on the stairs. The archways are draped with cobwebs.

The footman opens the door to the kitchen. In front of me is a vast room that goes on and on, as far as the eye can see. There are people everywhere: master cooks, footmen, errand boys, and pastry chefs. They’re rushing back and forth, armed with marzipan and mackerels and mulberries. I stare at the wooden spoons that are almost as long as I am tall. And at the pots containing saffron, the tubs holding Iceland cod and whiting in brine.

The kitchen makes me uneasy. There’s a strange mood in there, as if the kitchen were waiting for something. I pass two assistants who are making a pigeon pâté. A royal taster is sampling a sour burgundy. They are all in their own meaningless world; they are all waiting.

The footman leads me over to a back door and opens it impatiently. When I turn around to ask him a question, he gives me a swift kick. Involuntarily I gasp with pain. Then the footman points to the moat and the high castle bridge. He points to the slum quarters, the flatbed wagons, and the flea market. When he slams the door, I angrily wipe my mouth and start walking.

It’s still a hot summer day. The towers of Copenhagen are sweltering in the sun, and the barges gleam like silver in the canal.

I head across the High Bridge to Færgestræde. A horse-drawn cart loaded with wine barrels almost forces me into the water. A moment later I vanish into the crowd among the coaches, soldiers, and loudly shouting fortune-tellers.