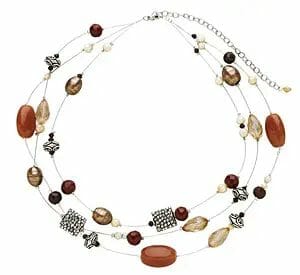 Travelers to Denmark have a wide choice when it comes to souvenir items to bring back home. But if you want to get something with a rich history of this Scandinavian country, then it has to be amber.

Amber is known as the gold of the North and used then to create the jewelry of the Vikings. It is an old lump of resin formed 30 to 50 million years ago and washed into the sea. Although they sank to the sea bottom, people visiting Denmark can still dig them out today especially along the country’s coastlines. You have to have a keen eye, though, to be able to spot amber on the beach as they usually hide in the seaweed.

Amber is colored yellow, white, black or with a reddish hue. It is often mistaken as stone but it is actually softer and feels warmer when you squeeze it. It should also feel warmer when you hold it close to your cheek. Another way to know if it’s the real one you’ve found is when you see that it floats to the surface if you put it in a glass of water mixed with two spoons of salt.

It is said that 95% of all amber comes from the ancient amber forests in the Scandinavian region. Amber is a type of fir tree that is now extinct. Each year, approximately half a ton of this resin can still be collected and then made as ornaments and jewelry.

Bornholm Island in Denmark is the site where the oldest amber, believed to be about 170 million years old, was found. Oftentimes, this lump of resin has a small insect or animal in it as it got caught in the resin in the ancient times.

For more beautiful pieces, check out the lovely jewelry creations of polishers that used amber combined with silver, gold and other precious stones. There are also workshops and museums that feature this historical resin.