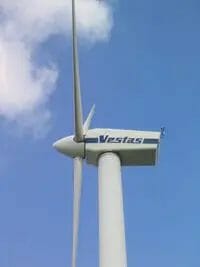 Wind power accounted for almost 20 percent of the total electricity production in Denmark in 2007. This is a significantly higher proportion than in any other country.

Denmark was a pioneer in developing commercial wind power during the 1970s. The Danish wind turbine industry is the world's largest. Around 90 percent of the national output is exported, and Danish companies accounted for 38% of the world turbine market in 2003, when the industry employed some 20,000 people and had a turnover of around 3 billion euro. Danish company Vestas became thus the world's largest producer of wind turbines, but was forced to reduce staff in 2009 due to the global financial crisis.

Denmark has relatively modest average wind speeds, but still has an impressive number of onshore wind resources. The highest concentration can be found in the Western part of the country, and on the Eastern islands with coastlines facing South or West.The offshore wind parks are much larger though as there are large areas of sea territory with a shallow water depth of 5 to 15 m. These sites offer higher wind speeds, in the range of roughly 8.5 to 9 m/s at 50 m height.

Denmark is connected by transmission line to other European countries and therefore it does not need to install additional peak-load plant to balance its wind power. Instead, it purchases additional power from its neighbours when necessary. With some strengthening of the grid, Denmark plans to increase wind's share even further in the coming years.

More articles about the wind power industry in Denmark: